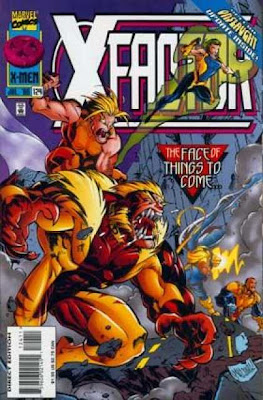 Summary: The members of X-Factor place themselves inside a holographic environment to train with Sabretooth. Forge hopes Sabretooth will show his true colors and that Washington will change their minds about adding him to the team. During the course of the training session, Shard suddenly appears. Wild Child disrupts the simulation and stops Sabretooth from attacking her. Polaris, uncomfortable with the team’s new direction, flies away to collect her thoughts. Meanwhile, Random is sent by Fatale to continue spying on X-Factor. He morphs from his true teenage form into his muscular bounty hunter persona. He speaks to Polaris, who tells him that she’s going to stay with X-Factor and try to change things from the inside. Later, Forge tries to convince Val Cooper to keep Shard’s existence a secret from the government, but she refuses. When she speaks to her superior, however, she changes her mind.

Production Note: All of the scenes with Random are clearly drawn by a different artist, but no one else is credited.

Continuity Notes: According to Forge, Shard’s existence is causing his holographic system to disrupt. He wants to keep her a secret from the government after she tells him about last issue’s break-in. He thinks that her knowledge of the future could be an asset. The government superior Val Cooper speaks to is intentionally obscured in shadow.

Review: It’s not uncommon for the various X-books to kill a few pages with a training sequence, but it seems like Mackie is using it to kill virtually the entire issue. Only one plotline is actually advanced, and it’s only incrementally, as Forge learns about the government agents who broke into their headquarters last issue. His plans for doing something about it, and how he even feels about the break-in, are just glossed over. The idea that Random had been spying on X-Factor had already been established, so almost a third of the issue is just spent reminding us of it. And I’ll again point out that the scrawny, teenage Random just looks incredibly dumb. Polaris’ doubts about the new direction, which I imagine are supposed to reflect the reader’s, are a nice touch. Unfortunately, her bland dialogue doesn’t really sell her dilemma, and she doesn’t come to much of a decision outside of, “well, I guess I’ll stick around for awhile.” The shadowy government agent Val Cooper speaks to is the definition of an old cliché, which wouldn’t even be so bad if the story was successful in making me care about any of this conspiracy stuff. Just as X-Man behaves irrationally and his powers explode in every issue of his series, I wonder if every issue of X-Factor is going to have faceless, shadowy government agents with secret agendas from now on.

I can't seem to remember: Is there any reason Fatale still spying on X-factor after Havok was already in her hands? I mean, that was Dark Beast original target, so now, that it had been achived, why Fatale still in the picture (aside from the fact that she was established as a X-factor villian)?