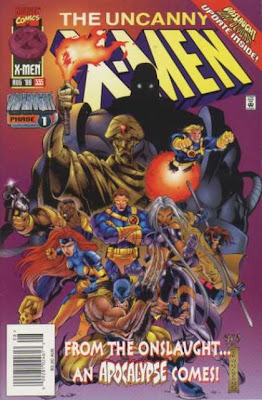 Summary: Apocalypse rises from his regeneration chamber and learns that Xavier and Magneto have merged into Onslaught. He predicts that the “age of wonders” which gave birth to the current generation of superheroes is ending. The Watcher stands silently nearby. Elsewhere, the Avengers arrive with X-Man at the X-Men’s decimated mansion. They’re attacked by a suspicious Gambit and Bishop, but the altercation is brief. X-Man senses a disturbance in the Astral Plane and creates a mental image of Onslaught. Magneto’s children, Quicksilver and Scarlet Witch, are upset when they learn that their father had a role in Onslaught’s creation. X-Force arrives at the mansion as the X-Men and Avengers formulate a plan. The united teams split up to warn the Fantastic Four that Xavier had viewed Franklin Richards’ file recently, and to find Magneto. X-Force is left at the mansion to guard the powerful telepath X-Man, and Storm volunteers to find the missing Cable. Cyclops and Phoenix make plans to meet Archangel and Psylocke on Muir Island, while Wolverine goes off on his own. In the sewers beneath Manhattan, the Dark Beast promises to create new attendants for Onslaught.

Continuity Notes: Nate Grey refers to himself as “X-Man”, the name I’m pretty sure he never used in his own series. His appearance in this title just emphasizes how absurd his name is, since he’s supposed to be highly suspicious of the X-Men. When he sees Phoenix, he mistakes her for Madelyne Pryor, which makes the incest aspect of their relationship even more explicit.

The ending of the “age of wonders” is foreshadowing for the ending of this storyline, which has the world believing that the Avengers and Fantastic Four sacrificed their lives to stop Onslaught. The Watcher is standing around because that’s what he does when writers need something to make an event seem important.

Onslaught is referred to as “pure psionic energy” which is the feeble justification for having him do whatever he wants, even things that are beyond Xavier’s power range.

Psylocke wonders if her exposure to the Crimson Dawn has made her heartless. Archangel doesn't exactly comfort her, saying that both of them have changed.

Apocalypse apparently has a telepathic link to Ozymandias, since he tells him that he’s scanned his mind and learned what he needs to know. The logistics of this don’t really make sense, unless Apocalypse has mental powers I’ve totally forgotten about.

The Dark Beast explicitly says that he did not create the Morlocks, in a line so obviously shoehorned in I can’t help but to wonder if it was added to appease some angry fans. It reminds me of Marvel’s recent backtracking on the various “It’s Magic!” explanations for the new Amazing Spider-Man continuity.

Commercial Break: The extra pages in this issue serve as ads for the upcoming “Heroes Reborn” event. Jim Lee quotes the now-standard lines about respecting the original material but updating it for modern audiences that always come with reboots. Rob Liefeld’s section brings us the infamous “Giant Boob Cap” and “Shrunken Head Red Skull” images.

Review: I guess the revival of Apocalypse was considered a big enough deal to take over the title of this issue, even though he’s only in the first few pages and has nothing to do with the actual story. A more accurate title might’ve been “Recap the Storyline and Assign Roles for the Tie-In Comics!” since that’s all that really happens here. I remember thinking that this issue was pretty dull at the time, but I was glad to see the X-Men finally interacting with the rest of the Marvel Universe again. Creating a more coherent, integrated Marvel Universe was a goal of Bob Harras, who was the new editor-in-chief of the entire line by this point, so that is one objective “Onslaught” successfully accomplished. (Although it’s ironic that Bob Harras was the one to bring this about, since other Marvel employees have accused him of hogging the X-characters when he was exclusively in charge of the X-line).

This is a snapshot of mid-90s Marvel, where the original Fantastic Four had to be reunited by editorial fiat, Iron Man was a “relatable” teenager, and the Avengers weren’t even trying to hide the fact that they really wanted to look like the X-Men. There’s not a lot of room for any of the characters to display much of a personality, but Lobdell does a capable enough job of preventing them from seeming too generic. The plot itself reminds me of the solicitations for almost anything Marvel and DC release these days…the heroes receive their orders and divide up to their own titles where they will deal with one aspect of the current crisis. It’s not particularly interesting, but it is fun to see Madureria’s take on the various Marvel characters.

Apocalypse always seemed to add new powers when a writer wanted him to do something. Hence the telepathic link (possible in continuity explanation, he created Ozymandius to be his historian/record-keeper, so built a way to access the info directly).

Apocalypse having telepathic powers comes up now and again even in the current era. He's not an Alpha or anything but he's competent generally.

Recap the Storyline and Assign Roles for the Tie-In Comics!

Don't ask me why, but I've always been charmed by the token issue of that that pops up in most crossovers.

As you said, maybe I just enjoy seeing all the characters interacting. That is, after all, supposed to be part of the fun of the crossover event, something that gets overlooked a lot these days.

You either get something like Messiah Complex, where every comic is just drafted into the main storyline (each issue following directly upon the previous one, with only a very minor focus on the book's own characters)

Or you get something like Civil War/Secret Invasion where the heroes are all so busy fighting each other there's no coordination issue necessary.

You either get something like Messiah Complex, where every comic is just drafted into the main storyline (each issue following directly upon the previous one, with only a very minor focus on the book's own characters)

I actually prefer this... It's why I consider X-Cutioner's Song to be the ideal model for a crossover. The main story of the crossover took over every title for three months, and all subplots were sidelined until it was over (except Peter David tried to keep his X-Patriots storyling going, which in my opinion hurt the overall crossover).

It also gets the crossover over quicker to do it this way. I'm getting tired of Modern Marvel's approach of a 7- or 8-issue main series, where every title in the Marvel Universe has to get roped in for several of those months too. It only leaves about four or five issues a year that aren't dedicated to a crossover! Secret Invasion would have worked much better as four issues of New Avengers and four issues of Mighty Avengers continuing into one another every other week for four months...

(Sorry, something about reading about all these old comics I loved in my teens [which also had their problems] really makes me want to start ranting about how Marvel does things nowadays!)

This is probably one of your funniest posts yet. I get so tired of hearing people defend X-Men comics in the 90's, and it's refreshing to hear the voice of someone who realizes how ridiculous they were.

I was dissapointed to see that Madureria’s portrail of Syren wasn't exaclly like Jean and Wanda, since it was seems to me like his new thing is to make every redhead girl look exaclly the same as the other one (Not to mention the fact that Wanda isn't even a redhead).