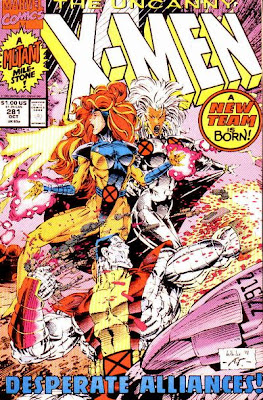 Summary
The X-Men arrive at the Hellfire Club at the White Queen’s request. After several assassination attempts, she feels that the two groups are both at risk and should form an alliance. Suddenly, they are attacked by Trevor Fitzroy. In Australia, a group of Sentinels controlled by Fitzroy attacks the Reavers. Their leader Donald Pierce asks Gateway to teleport him to the location of the person responsible for the attack. Gateway sends him to the Hellfire Club in New York. The Sentinels follow Pierce through the portal and quickly kill him. The White Queen and her Hellions team up with the X-Men against Fitzroy and his Sentinels. During the battle, both the White Queen and Jean Grey are seemingly killed.

Continuity Notes
Fitzroy has a “well known” hatred of the White Queen. Why exactly is, of course, a mystery. Later on in the story, he tells her “you…can do no more than bluster when your opponent is more than a child.” I have no idea if he’s referring to himself or not.

This issue was released at the same time as the other launches in 1991, but takes place months later in continuity. A scene in X-Men #5 is used as a prologue to this issue. I assume this was done to help readers figure out which order the stories were taking place. It’s hard to imagine Marvel doing something like this today, but the idea of the X-Men appearing in multiple titles simultaneously was still new at this time.

Review
I’ve always thought that this issue’s cover is especially ugly. In fairness, the interior isn’t this bad, and most of the pages look okay. But the cover is just awful, especially Storm’s face. What kind of an expression is that?

More than any other X-comic I’ve reviewed so far, this issue reminds me of the early Image comics. There’s a million characters given little to no introduction, tons of violence, lots of senseless death, and a barely coherent story. The pacing of this issue is insane. There's no dramatic tension at all, it’s just one chaotic event rapidly followed by another. I’m sure the creators viewed this as an important issue, with the introduction of new villains, the deaths of many established characters, and the start of a new storyline. Instead of feeling like you’re reading an important new chapter of the X-Men, you feel like you’ve been thrown into a mess of a story where characters randomly appear, make weird faces, and then get killed.

Not only are the characters poorly introduced, but the stiff dialogue also makes it impossible to care about anything that happens to them. This is the first of the X-titles I’ve reviewed so far that doesn’t even try to give the characters any personality. The only characterization we see is Jean Grey feeling awkward about being in the Hellfire Club mansion, and Iceman flirting with a Hellion. Of course, since the story mainly consists of characters being attacked and watching other characters get killed, there wasn’t an awful lot for Byrne to work with.

The new villain introduced in the issue, Fitzroy, reads like something out of bad fan-fiction. Rather than being an interesting or threatening villain in his own right, he shows up attached to several existing concepts. The Sentinels had been used pretty sparingly during this time, and had been re-established as major threats in the Days of Future Past storyline. Fitzroy shows up already able to control his own Sentinels, which the story tells us are more lethal than any before. They easily kill off most of the Reavers and Hellions, who had already been established as credible villains. And, rather than having any type of interesting origin of his own, Fitzroy’s just given a mysterious connection to the White Queen. The next issue reveals that Fitzroy is from the future, tying him into yet another established X-Men storyline. All of the concepts Fitzroy ties into can stand on their own. Can Fitzroy? If he doesn’t have established villains to kill, control, or have a vague history with, what does he have?

On top of its other flaws, this issue also has a terrible ending. Fitzroy watches two of his Sentinels kill Jean Grey while the other X-Men fight outside. Fitzroy is thrilled that Jean's dead and says that he'd like to kill all of the X-Men. On the very next page, Fitzroy and the Sentinels are gone, and inside the wreckage of the Hellfire Club, we see Colossus cradling Jean’s dead body. Where did Fitzroy go? Why didn’t he just walk outside with his two super-powerful Sentinels and finish the job? He was clearly on a roll. There’s not even a scene of Fitzroy leaving, he just disappears from one page to the next. It’s the type of lazy ending this issue probably deserves.
Posted by G. Kendall at 9:26 PM

Ahhh, this is the one I was waiting for. Uncanny 281 is the comic that really pulled me into the x-universe all those years back even if it doesn't hold up so well now. You are absolutely right that it definitely echoes the early Image comics with art that focuses on flash over substance, which is probably excatly what appealed to my 11-year-old self. White Queen's boobs didn't hurt either, I'm sure. Still, even back then being I do remember oddly disconcerted at the facial expressions on the cover. Do all the X-Men fight with their jaws unhinged?

Despite it being an otherwise horrid issue, I still like the portrayal of the Hellfire Club here. Claremont had been writing the Club as an evil-but-still-respected-and-only-evil-sometimes organization for years over in NEW MUTANTS, but this was the first time the X-Men came face-to-face with the "new" portrayal (in fact, I think this is the first time the team -- as opposed to just Ororo or Magnus -- had encountered the Club since back before the Massacre). Following Claremont's throughline, Lee and Portacio had found something interesting here: how do the X-Men react against an enemy that not only can't they attack, but who wield such useful resources that the X-Men need to protect them? Plus, Jean Grey's return visit to the scene of Dark Phoenix? Unfortunately, these great ideas never went anywhere.

Still, this is probably the best issue of UNCANNY until the Song. Faint praise, I know. Sad to see how quickly the franchise went straight to the crapper after Claremont left.

I hated this issue, due to the horrific violence and the fact that the Hellions were needlessly slaughtered (yes, I was an old-school New Mutants fan). I have not bought an issue of Uncanny since (though I have bought Astonishing, and Morrison's New X-Men)

There's one more continuity error, if I remember correctly, though it is an obscure one. Empath is penciled in as one of the Hellions, and killed on panel. He had actually quit the team several years (real time) previous. Minor nitpick, except the Hellions has appeared in an issue of New Warriors only about two months before this issue was published, and he wasn't with the team there, either.

Definitely an awful ending but I don't mind a issue of a book focusing on non-stop action and drastic going-ons instead of having much, if any, characterization. With some caveats. New characters DO need characterization OR a near-future issue will satisfyingly fill us in on the mystery of who they are. And the drastic going-ons need to lead to something even more interesting creatively then what might've been had they been left alone. Doesn't happen here.
But when I read this comic I liked how quickly these large threats were happening. I wasn't a regular reader so I chalked it up to me not being around to know what the connection was with all these folks. And I think future writers did a good job of using the Hellion's death as a turning point for Emma Frost. But I always liked the Reavers and seeing them die seemed a shame. This issue is a mixed bag for me. With a cover that looks like a 5 minute sketch done on a turbulent airplane.

It's astonishing how bad this comic is.
Claremont had been going off the rails for a couple of years at this point and clearly needed a strong editorial hand but replacing him with these clowns has got to be one of the worst decisions ever made in comic history.
I do love the White Queen's repeated explanations for an alliance between the X-men and hellfire Club. Someone's attacking the Club and if they're powerful enough to harm us then can the X-Men be far behind. ...er, what? They're enemies. Why would someone attacking the notoriously evil Hellfire Club automatically be assumed to be an enemy of the X-Men. They can't even be bothered to try and make this make sense.
Of course what really stands out here is the slaughter of established characters that would be such a signature of the Image crowd idiocy of this time. If I kill loads of characters people will think I'm as brilliant as Miller or Moore. This contempt for legacy would have one inevitable result. If you kill characters off with scant regard then people will start bringing them back from the dead with similar nonchalance.
This is an editorial failure as much as a writers one.
I stopped buying X-men only a few issues after this.

I want to get into 90s X-Men reading, but can't seem to find a good jumping-on point with Uncanny. Conventional wisdom says #281 as it's the same month of release as X-Men #1, but this seems to be mid-arc. Is there a better jumping on point for me?

This is the start of the storyline, it's just written chaotically. In terms of reading order, it goes X-MEN #1-5, then UXM #281.