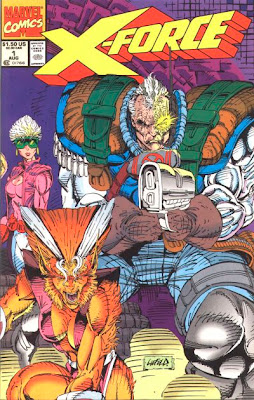 Summary
The X-Force team (Cable, Feral, Boom Boom, Cannonball, Warpath, Domino, and Shatterstar) travel to Antarctica to take out one of the Mutant Liberation Front’s secret bases. X-Force easily defeats the MLF, but the terrorist group teleports away at the end of the battle. SHIELD Commander G. W. Bridge investigates the abandoned base and discovers Cable’s hardware, vowing to bring him to justice for unknown reasons. Meanwhile, former teammate Sunspot and his new mentor Gideon are taken hostage by Black Tom during a business meeting at the World Trade Center.

Gimmicks
This issue comes packaged in a polybag with two cards. One of the cards is an ad for “X-Force Card Shirts”, with a choice of five designs taken from the trading cards. The price is $15.95 (!), plus $2.00 for postage and handling for one shirt. According to The Inflation calculator, $17.95 would be $26.71 in 2006 dollars. If X-Force #1 was at one point the highest selling comic in history, I can only hope that X-Force #1 t-shirts were the highest selling overpriced comic merchandise at one time. This ad does make me wonder how many of these shirts Marvel sold, and if Rob Liefeld made royalties off of them.

I’m embarrassed to admit that I have two copies of this comic book. I purchased one version with a Deadpool trading card, and another with a Sunspot & Gideon card. Why exactly I chose these two is a mystery. I had no idea who Deadpool was, was equally clueless about Gideon, and had only a vague knowledge of Sunspot. I was convinced that I needed two copies, though. One to open and read, and one to keep sealed and save because it was going to be very valuable. I remember that I had to ask my mother for extra allowance money to buy two copies. For some reason, my mother didn't seem to understand why I wanted two copies of the same book. At least I wasn't the only sucker out there, though.

The Sunspot & Gideon card has a passable drawing of Sunspot, and a rather hideous version of Gideon that fulfills a lot of the Liefeld clichés; no eyes, broken spine, tiny waist, and pointless accessories (in Gideon’s case, some type of golden metal that covers most of his arms). Sunspot’s group affiliation is listed on the card as “The Prophet$”, which I don’t think ever came up in the actual series. If there has never been a hip-hop group named “The Prophet$”, I will be sorely disappointed.
The artwork on Deadpool’s card also features a tiny waist, and legs that start off with thick thighs that dramatically slim down to very tiny ankles. As an eleven year old, I wonder if I noticed any of this. I think I had a good faith agreement with Marvel; if they were publishing this guy’s artwork, then I assumed it must be professional enough to be published.

The text printed on the polybag brags twice (once in very large print) that the trading card included is FREE. I suppose it was nice of Marvel to throw kids a bone after charging so much for those t-shirts. I wonder if Marvel considered the t-shirt promotion a nice way to help offset the cost of the trading cards.
I Love The '90s

Gideon and Sunspot have a meeting at the World Trade Center. They joke that the business rivals they meet are going to need tourniquets to stop their bleeding.

Continuity Notes
Stryfe implies that Nathan is just one of many names Cable has used over the years.

Tyler is mentioned, and Cable states explicitly that he is not his son. The back story given is that Tyler and Cable were partners and that Tyler was later killed after joining the MLF.

Cable uses his telekinesis to pick up tools .in one scene The dialouge suggests that he’s deliberately hiding this from the team. I believe this is the first reference to his mutant power, which is odd given that the character had existed for two years at this point. Was just calling your character a “mutant” good enough in those X-obsessed times?


The Mutant Liberation Front employs a large army of soldiers. I assume that none of them are supposed to be mutants since they’re not using powers, or get nice colorful costumes.
I believe this is G. W. Bride’s first appearance, a character who just shows up as a high-ranking SHIELD official with a mysterious (of course) connection to Cable.

Commercial Break
A mail-order company named Entertainment This Month has an ad featuring the image of Cyclops from the cover of X-Men #1. His costume is mis-colored, but that’s forgivable since it had not actually debuted yet. However, the bottom half of his body is obviously drawn by someone else and is remarkably ugly and amateurish. It’s as if the lower half of his body is simultaneously exists in the world of Dr. Katz, Professional Therapist. I have a mental image of an ETM employee looking at the Marvel preview art and realizing that the image of Cyclops they want to use is cropped off at the waist. “No, man. It’s okay. I can do this. I can finish this up. It’ll look okay.”

Approved By The Comics Code Authority
Feral’s buttocks are fully visible on page four. I really hope that this wasn’t intended to be titillating.

Shatterstar cuts off Reaper’s hand during the opening fight scene. I’m pretty sure this kind of stuff was pretty rare in mainstream comics at the time.
In an illustrated Bullpen Bulletins page, editor Michael Higgins is drawn with a “Legal Lies Pot” tattoo. Also, Danny Fingeroth appears to be truly excited about Howard Mackie’s work on Web of Spider-Man.

Review
Oh, dear. I plan on reviewing these comics in the order I have them filed. Being very continuity-anal in my youth, I painstakingly arranged these books into the order I was convinced they happened. When I set out to do this, I hoped that this comic wouldn't be the first one in order. So, of course it was.


I’m sure X-Force #1 has already taken its pounding on the blogosphere over the years, so I’m not going to focus that much on what you probably already know. Yes, Cable’s shoulder pads are too large, and he wouldn’t be able to see anything if he turned his head in either direction. Yes, there are multiple, extremely large lines that somehow grow out of the characters' crotches. Yes, most of the characters have thighs the size of tree trunks.
I will say that it's readable, at least. I haven’t read this comic since it was first released and had no idea what to expect. The story is very slim and easy to follow, so I suppose it goes against the X-stereotype of being confusing or impenetrable. It is filled with characters with mysterious pasts and mysterious connections to one another, though. Stryfe, Cable, Bridge, and Gideon all fit into the mold of characters with vague pasts and unclear motivations.

At the same time, all of the characters are introduced clearly, and their hazy backgrounds and motivations aren’t getting in the way of the story at this point (of course, the story so far is only that Cable and his team wants to stop Stryfe and his team). Not having followed the Liefeld issues of New Mutants, I wasn’t confused or thrown out of the story at any time. As a new reader, the mysteries actually drew me into the book and didn’t distract from my enjoyment at all.

Fabian Nicieza has made it clear on several occasions that he was not plotting the book at this point and was only put words into the characters’ mouths. His scripting is occasionally melodramatic , but is fine for most of the issue. Most of the characters have natural speech patterns and we do learn about their personalities through their words, so it succeeds on that level.

Two of the X-Force members, Shatterstar and Feral, are outright bloodthirsty; both of them comment on how much they wish they could just kill their opponents. Cable makes clear that the team should be prepared to kill, but only in self-defense. In a dossier that appears later in the issue, Cable states that he's very pleased by Feral's willingness to kill. I have to think that the ruthlessness of the series was a major appeal to many fans. If Wolverine was the most popular X-Man, here was a team filled with Wolverines. Not a single character in this issue gives you the typical Claremontian view of not dragging yourself down to your enemy's level. This type of mercilessness really is the book's moral point of view.

A series of dossiers in the back of the comic are actually called “Cable Guide”. I can’t tell if this is an intentional joke or not. I assume that Nicieza wrote these, and they’re actually not a chore to read. Some of them are fairly humorous, and they do help to flesh out the characters and conflicts of the series.

All in all, this is far from the worst comic ever published (the majority of Image's early input is much worse than this at least). We basically have amateur artwork, a mediocre story, and competent dialogue. I'll give the very faint praise of "it could've been worse".
Posted by G. Kendall at 8:35 PM