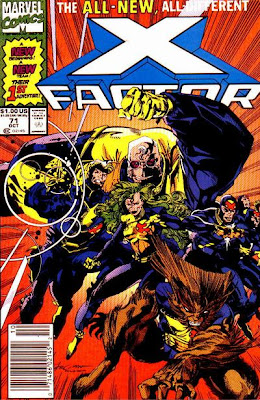 Summary
Val Cooper recruits Havok and Wolfsbane to join the new government-sponsored incarnation of X-Factor, which already consists of Polaris, Guido, and Madrox. Quicksilver travels to Washington DC looking for X-Factor’s help in finding a villain who has turned his powers against him. Later, Madrox is apparently murdered in his apartment.

I Love The ‘90s
The inside front cover has an ad for the Bill & Ted’s Excellent Adventure NES and Game Boy games.
Inside X-Factor’s headquarters, a George Bush, Sr. poster doubles as a dartboard.
Guido refers to himself as a sensitive “90’s guy”.
Professor Xavier refers to President Bush’s high approval ratings.

Commercial Break
The back page has an ad for X-Men action figures. This was a big deal at the time, as the characters were only known amongst comic book fans. They look pretty awful now, except for the Nightcrawler figure, which is mostly painted black.

Approved By The Comics Code Authority
The blood on Madrox’s body on the last page is actually colored red, and there’s a decent amount of it. Usually in comics at this time, blood was inked black.

Review
While X-Force #1 opens with all action, the relaunched X-Factor series begins with a talky issue, with a bit of humor and cutesy dialogue. So far, the franchise is at least offering some diversity. Pretty much every character in this series is a cast-off from another X-title. Havok was a part of the main title in the late ‘80s, and played a large role in the X-Tinction Agenda crossover from a year earlier. He’s the largest “name” in the book and a probably the main reason why I decided to follow this title as a kid. Wolfsbane had been a long time New Mutants character that last appeared in the X-Tinction Agenda. Polaris, Guido, and Madrox had been a part of a long-running subplot in Uncanny X-Men, and all played roles in the recent Muir Island Saga crossover. Quicksilver is the only character that really comes out of nowhere, but his history with the X-titles goes back to his first appearance. It may seem like a random collection of characters, but for people who had been following the X-line it doesn’t come across as contrived. I think that Marvel tired for this type of coherence after its more recent crossovers, but the results have been far from successful.

Peter David’s X-Factor stint is one of the few runs from the line that’s still held in high regard by fandom. It gets off to a slow, but enjoyable start in this issue. Larry Stroman’s stylized art holds up very well, and it’s worth noting that his work didn’t really fit in at all with the artwork used in the other X-titles at this time. It’s interesting that the fans of this era could embrace the idiosyncratic art of people like Liefeld or Portacio, but not get as excited over Stroman’s work. He brought just as much energy to the page, and his work is certainly easier on the eyes. Was it the lack of crosshatching and relentless detail lines?
Posted by G. Kendall at 8:34 PM

Larry Stroman was amazing- I also never understood why people disliked his work back then. I can understand why people are put off by his recent X-Factor (vol. 3) #33, but that largely had to do with a shift in the books feel and tone.

Hands down, this is my favorite comic run of all time.