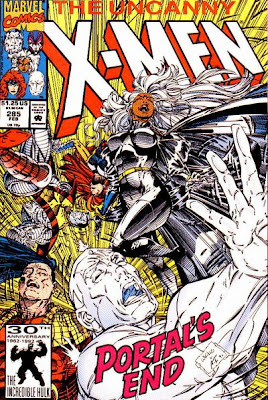 Down The Rabbit Hole

Summary
The X-Men are separated after entering the dimensional portal. Archangel accidentally kills a group of rebels and is thanked by the “priestess-queen” of the Triumvirate, while Colossus is praised by another group as their savior. Storm arrives with a mysterious recluse who claims to be Colossus’ brother.

Continuity Notes
While unconscious, Archangel’s metal wings massacre a group of rebels. The narrative caption explicitly states that his wings do this without his direction. In only a couple of issues, I believe we’re told something very different.

This is the return of Mikhail Rasputin, who had previously only been mentioned in a narrative caption during an early issue of the All-New, All Different X-Men.

Review
Jim Lee returns to co-plot this issue, and the story becomes slightly more comprehensible. The basic idea is that the divided X-Men have aligned with opposing sides of a civil war, although that’s not very clear for most of the story. The rebels look exactly like the people they’re opposing, so it’s hard to tell if the different X-Men have taken opposite sides until the very end of the issue. For the first time in Portacio’s run, this issue has something besides fight scenes. It’s not much, but you see Storm befriend a stranger and Colossus deal with being praised as a savior. Colossus doesn’t come across very well in this story. Immediately after being exalted, he tells Jean that he’s beginning to enjoy it. In his next scene, he’s smiling while being surrounded by a group of scantily clad women.

The people who praise Colossus talk about the importance of sealing the portal. So far, there’s no reason given for why the authority figures would want it to grow. When word of Colossus spreads, the town crier announces that their savior has returned. So do the rebels have their own communities? It’s amusing that this race of people in futuristic space armor with laser blasters still have a town crier, complete with an old-timey bell he rings in the town square.

I think that a lot of the ill will toward ‘90s X-Men comics comes from this run. I believe #281 went into a second printing, and I remember seeing it in a lot of comic packs at Wal-Mart. The sales explosion of the early ‘90s had begun and the X-Men received a lot of the focus. Clearly, a lot of people were exposed to these issues, and they’re just not any good.
Posted by G. Kendall at 8:35 PM