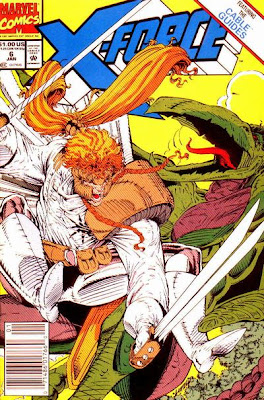 Summary
Toad’s new Brotherhood of Evil Mutants team up with Masque and the Morlocks. The Morlocks are still angry at Feral for leaving them to join X-Force, so the Brotherhood agree to take the team down in honor of their alliance. After a training sequence, Siryn, Shatterstar, and Warpath are attacked by Toad, Blob, and Sauron.

Continuity Note
Phantazia was on the cover of the previous issue, but debuts in this one. Only her name is given, as she does absolutely nothing in this issue.

“Huh?” Moments
Warpath has a ponytail that disappears from panel to panel. He also calls the two cylindered tubes Shatterstar is holding with his bare hands “swords”. Maybe Nicieza was scripting this before the inks were completed?

Miscellaneous Note
This issue has only eighteen pages of story. The other four pages are more “Cable Guide” dossier pages. This is the second story in three issues that’s been cut short.

Review
This is the second issue in a row that’s mostly build-up and not a lot of plot advancement. It’s not as bad as the previous two issues, though. There’s finally a reaction to Feral cutting Cannonball, only four issues after it happened. Having the Brotherhood team up with the Morlocks isn’t a bad idea, and introducing Sauron as a new member makes sense. Toad and Sauron were two villains that had been largely ignored for years, so using them again isn’t a bad idea. They’re just not used for anything interesting.

It’s revealed that Cable orders his weapons from AIM, and he thinks that it’s “hypocritical” to get into the ethics of where you’re buying guns from. Does Cable really believe that Smith & Wesson are as bad as a terrorist group? I don’t think that even the most ardent gun control advocate would go that far. I really have no idea what the point of this scene is. Are we supposed to view Cable as a rebellious bad boy because he helps to financially support a terrorist organization? Is Cable saying that he’s just as bad as a terrorist group for using guns himself? Maybe the point is to show that Cable is a firm believer in “the ends justify the means” and that his mission justifies supporting AIM. Was this scene supposed to be this disturbing?

There’s another scene where Warpath says that he’s driven solely by revenge. Not exactly the most heroic motivation on Earth. I almost wonder if these scenes were setups to future storylines where these characters would learn the errors of their ways. Unfortunately, I think we’re supposed to take this stuff at face value.
Posted by G. Kendall at 9:05 PM

Why HASN'T someone retconned Toad as a Morlock by now? He'd fit perfectly, and he'd even be a Big Player among the mutant outcasts instead of being a joke among the elites. For that matter, why not go for some connection between the freaky Savage Land mutates and the Morlocks? Though I can't see why the Morlocks or the Brotherhood would hook up with Sauron -- the Morlocks wouldn't care for him because he's a bizarre dinosaur only when he wants to be, and the Brotherhood wouldn't want him (nor he it) because he's not a mutant.

Not to mention (he said, participating in a three year old conversation), the Morlocks probably wouldn't be too thrilled in keeping around someone who regards mutants as a light afternoon snack.