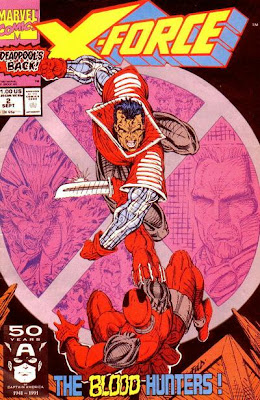 Summary
Kane stops Deadpool from stealing a shipment of Japanese technology for his boss Tolliver. G. W. Bridge attempts to recruit Kane for a new team set to capture Cable, but Kane refuses. Meanwhile, X-Force has a training session in the woods, and Feral guts Cannonball. While at the World Trade Center, Black Tom summons Juggernaut.

Review
It’s the second issue of their series, and the title characters have already taken a back seat to various subplots and mysteries. The first half of the issue is dedicated to introducing Kane, the new Weapon X. Kane was pushed as a major character in the X-titles for years before fading into obscurity. I believe he last showed up in Deadpool’s solo series as an out-and-out villain. Kane fulfills a standard X-stereotype by being involved in three mysteries in his very first appearance. He’s a part of the mysterious Weapon X agency, he’s tracking down Deadpool and his mysterious employer Tolliver, and he has a mysterious past with Cable. After most of the mysteries surrounding Kane were resolved, no one at Marvel seemed to have any use for the character.

The X-Force characters appear in exactly half of the story pages of this issue, and their appearance is limited to a tedious training sequence. In fairness, the scene does establish the depths of Feral’s psychosis, and Cannonball’s injuries do have plot significance in future issues. Still, a lot more could have been done with eleven pages. One of the things I intend to do with this blog is compare the actual material to the stereotypes that surround it. The X-books were criticized heavily in the 1990s for having incomprehensible plots, but so far, X-Force is content just giving you kicks to the face.

Liefeld’s art is exactly what you would expect. In a scene that lasts nine pages, Kane’s eyes are only visible in one panel. In all of the other panels, I assume he’s just squinting really hard. Maybe he’s intensely concentrating on his mysterious backstory. In another panel, the members of X-Force all seem to be floating off the ground. Nicieza’s script is again sufficient, with only a few clunkers, like Kane mentally telling himself to “Get –Into – The- Groove”.

It’s interesting that the cover brags, “Deadpool’s Back!” in only his second appearance. The entire comic is really dedicated to Liefeld’s new creations, while characters established years earlier in New Mutants barely do anything (except bleed, in Cannonball’s case). The success of this series, and of Image a year later, shows the audience’s willingness at the time to invest in new characters. Getting readers to accept new characters today seems almost impossible for the Big Two. The only new character Marvel seems to have had success with in recent years is a female Wolverine clone.

I'm really enjoying your blog! I never got the X-Men bug, but thoughtful reappraisals of childhood faves please me somehow.

This is a good and thoughtful blog so far. I wish I still had the issues around to read along and give the kind of good discussion comments this sort of analysis deserves.

Anyway, keep up the good work.

I was reading the introductory post and fearing for the absence of references Alan Davis' Excalibur run. Fortunately, you finally say you caught up with it later on. I hope to see some reviews of that run, as it's really one of the best Marvel comics ever.

Just found your blog, via Progressive Ruin. I started reading the X-books about a year or two before the period covered here and I'm enjoying the look back so far.

Great blog! I came over from Progressive Ruin as well - this period represents the time when my disillusionment with comics was growing: I had been a huge New Mutants fan, and watching relatively believable children get suddenly turned into Lifeldian ruthless mercenaries soured me on comics tremendously. After about X-force 15 or so, I quit comics, and didn't come back until about 3 years ago.

Thanks for the kind words, everyone.
Tony, I agree with you about Alan Davis' run on Excalibur. I'm not sure if I should include it with these reviews since I didn't buy those issues at the same time as the others I'm reviewing. I would like to write about his work on Excalibur and ClanDestine, though.

Notch up another reader routed over from Progressive Ruin. Love the premise and the posts so far. I too was born in 1980 and was coming into my own as a comic fan in the early 90's with the X-Men occupying much of my time. It will be interesting to go back through them with you as I still have a soft spot for many of the characters (Cable) and storylines (X-Cutioners Song) of that era. Great stuff, keep it up.