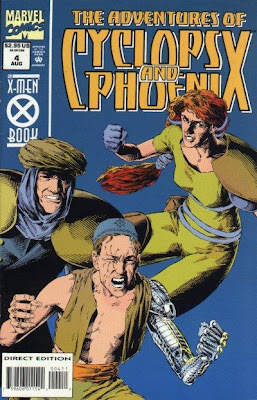 Summary
Nathan’s techno-organic virus is out of control, apparently as a reaction to his body going through puberty. Turrin tells Scott and Jean that he’ll probably die in a few hours. Rachel Summers mentally appears to Nathan and tells him that he’ll need to use his telekinetic powers to overcome the virus. Jean leaves on a mission to destroy another one of Apocalypse’s labs while Scott stays with Nathan. When she arrives, Ch’vayre asks her to help him stop Apocalypse from overtaking Stryfe’s body. Nathan pulls his body together and returns to consciousness. He tells Scott that he senses that Jean needs their help. Jean and Ch’vayre try to stop Apocalypse, but are unsuccessful. When Apocalypse senses that Stryfe is a clone and not the original, he alters his plan to only temporarily take his body until he can find the original Nathan Summers. Scott and Nathan arrive and use their powers in unison with Jean to fight Apocalypse. Nathan blocks Stryfe’s telepathic connection to Apocalypse, as Jean senses nothing in Apocalypse’s host body. Jean and Scott begin to fade away from the timeline. Rachel appears to them, explaining that her physical body died hours ago and that she can no longer keep them here. As they prepare to return to their original bodies, Rachel asks Jean to take the name “Phoenix” back. Scott says goodbye to Nathan as he disappears, and Nathan pledges to restore the dream that Apocalypse destroyed.

Continuity Notes
Apocalypse says that he named Stryfe after an “ancient enemy” who almost killed him, forcing him to grow stronger. He’s referring to Stryfe’s actions in “X-Cutioner’s Song”, which means that Stryfe was named after himself.

Rachel tells Nathan that his powers are strong enough to “sense a stray thought a continent away” and “extinguish a star with something less than a conscious effort”. This is the first time Cable’s been referred to as super-powerful.

Apocalypse lists Holocaust as one of the mutants he’s outlived. Holocaust still hasn’t appeared in continuity yet, but he did receive a profile in Stryfe’s Strike File.

Jean Grey takes the name “Phoenix” again for the first time since 1980. She takes it back to honor Rachel and the work she’s done in the future.

Review
It’s just as dull as the previous issues, unfortunately. I guess there’s nothing egregiously terrible about the story, but there’s absolutely nothing engaging about it either. At no point in any of these issues did I care about any of the characters, nor was I surprised by any of the plot developments. It’s just four straight issues of complete tediousness. Scott Lobdell did an admirable job on the Scott/Jean engagement issue, so I’m sure he could’ve turned out a miniseries about the characters that was at least competent. Instead, we get four pointless issues about Li’l Cable and his boring parents. If aging Cyclops and Phoenix ten years in the future was supposed to add something to the characters, I’m at a loss to explain what it was supposed to be. I think Ha’s art was supposed to carry a lot of the story, but most of the future designs he developed for the series aren’t that impressive. It’s a forgettable series, and it’s sad that Marvel charged twice its normal cover price for each issue.

Did a 616 Holocaust ever show up? I thought the Stryfe files had a different design then the one from the Age of Apocalypse.

I always wondered what else Gene Ha had done before he wowed us all in Top Ten.

Yes, there was a drastically different design in Stryfe's Strike File. I don't know if they ever introduced a 616 Holocaust, since the AoA version ended up in the mainstream universe.