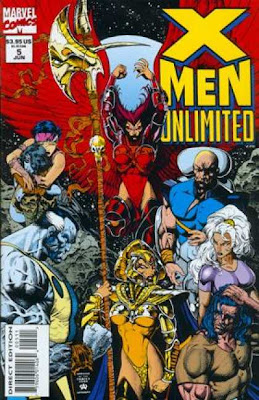 Summary
Professor Xavier, Forge, Storm, and Jubilee are summoned by a Shi’ar envoy to the Kree planet of Hala. Lilandra wants the X-Men represented at a ceremony to induct the Kree into the Shi’ar Empire. As a part of a scheme by the Kree’s Supreme Intelligence, the Shi’ar were manipulated into creating a negabomb that destroyed most of the Kree. The Shi’ar have taken over their planet, and Lilandra has placed her sister Deathbird as governor of the Kree in order to keep her actions in plain sight, and to hopefully suppress her thirst for power. At the celebration, Jubilee meets a young Kree girl named Shym’r. She’s taken away quickly by her older brother, Trigor. Trigor soon tries to assassinate Deathbird, and when that fails, kills himself in a suicide bombing.
That night, Jubilee explores the city of Kree’lar and finds Shym’r again. Shym’r takes her to meet the other members of the Kree Resistance. Two of the members, Visog and Dantella, are willing to kill Jubilee, but their leader, Malakii, spares her life. Jubilee arranges a meeting between Malakii and Lilandra. Convinced that the two will not come to an understanding, Visog and Dantella go off on their own. Jubilee and Shym’r follow them and discover their plan to destroy a Shi’ar stargate outside of Hala. Dantella knocks out Jubilee and Shym’r before they can tell the others.
Meanwhile, Lilandra’s meeting with Malakii is interrupted by Shi’ar authorities. Feeling that she shouldn’t be seen meeting with terrorists, Lilandra and the others escape to the rail tunnels. They soon discover that Visog and Dantella have left in the Kree’s shuttle. They follow the Kree rebels in an old freighter and make contact with Visog. He tells Malakii that he’s using the shuttle as a bomb to destroy the stargate. Visog kills Dantella when she doubts the plan, and then commits suicide as the shuttle reaches the stargate. Forge and Malakii enter the shuttle and alter the frequency of the destruction to resonate with the stargate’s energy, rather than destroy it. They succeed in stopping the stargate’s destruction, but when they return to Hala, Deathbird demands the arrests of Malakii and Shym’r. Lilandra agrees, explaining to Xavier that allowing Malakii to go free would encourage more acts of terror. Xavier begins to understand, but realizes that Lilandra’s role as empress will always stand between them. He returns to Earth, unsure of their relationship.

Continuity Note
The Shi’ar defeated the Kree in the “Operation Galactic Storm” crossover, which went through the Avengers titles in the early ‘90s.

Approved By The Comics Code Authority
Virtually every female in this issue, including Jubilee, appears scantily clad at some point. Shi’ar formal wear must be inspired by back issues of Heavy Metal. Storm seems to be suffering from the “Boobs Larger Than Head” syndrome on a few pages.

I Love the ‘90s
Jubilee compares the Shi’ar ceremony to “Lalapalooza” (which isn’t the way the music festival spelled its name, but it’s apparently an accepted spelling of the word it’s named after).

Review
The original idea behind X-Men Unlimited was that each issue would feature a big event for the X-Men. Considering the fact that every issue was 64 pages and cost four dollars, that’s an admirable goal. The first four issues saw the introduction of a new villain (who was supposed to be a big deal), the return of Magneto, Sabretooth “joining” the X-Men, and the long-awaited origin of Nightcrawler. By the time we get to the fifth issue, it’s a story about a few X-Men fighting Kree terrorists and Xavier kinda breaking up with his girlfriend that we never see. In terms of just telling a story, it is a lot better than the previous issue; but in terms of doing anything meaningful with the characters or continuity, it’s a huge letdown. The Shi’ar were introduced in Uncanny X-Men and were a large part of the Claremont run, so I can understand why some fans would want to see their role in “Operation Galactic Storm” dealt with in an X-book, but that still doesn’t feel like much of a “big event”. Five issues in, and the book’s already turning out overpriced inventory stories.

To his credit, Moore does create a story that fits into the 64 page format well, and he at least tries to use the Kree to make observations about the featured X-Men. I’m not really a fan of putting the X-Men in science fiction settings, but the story does a decent job of giving the aliens relatable personalities, at least. I like the way the ending shows Lilandra’s willingness to make hard decisions without making her totally unsympathetic (after seeing what’s happened to Iron Man, Xavier, and Spider-Man in recent years, I’d say Marvel’s current writers have lost that trick). It still reads like an inventory story, though, which isn’t what this series was intended to be.
Posted by G. Kendall at 8:24 PM