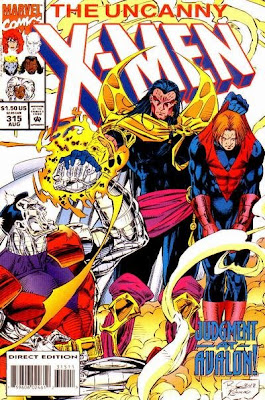 Summary
The Acolytes are placing Neophyte on trial for betraying them in France. If he is found guilty, the sentence is death. Colossus is defending him, while Amelia Voght represents the prosecution. As Exodus is speaking to Magneto’s comatose body, Scanner enters and tells him that the trial is beginning. When she catches a quick glimpse Magneto’s face, Exodus punishes her until she asks for forgiveness. Exodus oversees Neophyte’s trial, as Milan uses his power to replay Neophyte’s recruitment into the Acolytes. As the questioning continues, Voght allows Neophyte to explain why he turned against the Acolytes and decided to follow Charles Xavier’s way. Speaking the name of Xavier causes a fight to break out, as Colossus tries to protect Neophyte. Exodus stops the fighting and tells the Acolytes that he will consult with Magneto and let him decide Neophyte’s fate. As they wait, Voght tells Colossus that she’s realized that the true path lies somewhere between the ways of Xavier and Magneto. When Exodus returns, Colossus gives a final defense for Neophyte’s life. Exodus tells the Acolytes that Magneto has spared Neophyte’s life, but has banned him from Avalon. As the Acolytes leave, Exodus questions if his followers are losing faith in him, while Magneto appears to smile in the background.

Review
Another standalone story shows up in the month before the Phalanx crossover. Roger Cruz does his first work for the X-books by turning in a passable Jim Lee impression. Cruz will regularly work on the X-books until the late ‘90s, and now pencils the X-Men First Class title. This issue appears to be another attempt to redeem Colossus after the events of “Fatal Attractions”. I’ve mentioned before that it seems as if Marvel regretted having Colossus betray the team as soon as it happened, since the stories immediately following the event tried so hard to rationalize his decision (in the final part of the crossover, it was even revealed that he had brain damage). Towards the end of this story, Colossus has a monologue where he realizes that it was his own unwillingness to sacrifice for Xavier’s dream, and not the dream itself, that failed him. This seems to be the final step in having the character redeem himself, even if it seems as if the writers were in no hurry to use him again. Looking back, the whole “Colossus is a traitor” plotline has to be seen as a dud, since it never added anything to his character and was forgotten about as soon as he returned to an X-team. Between Gambit, Psylocke/Kwannon, Colossus, and Xavier/Onslaught, I think there were more than enough “traitor” storylines in the ‘90s.

This issue continues with the idea that Colossus is staying with the Acolytes to teach them about the “true” Magneto. The “true” Magneto he’s referring to would be the Claremont interpretation of the character, the one that “Fatal Attractions” so thoroughly eviscerated. That’s the main problem with this story, as we see Colossus trying to teach the Acolytes about what a compassionate, caring man Magneto was. The Magneto featured most recently in the titles wasn’t a kind, sympathetic man, he was a murderous loon who crashed a little girl’s funeral and casually killed one of his followers for no reason. After witnessing all of this first hand, why would Colossus want to teach anyone about what a good man Magneto was?

The idea of the Acolytes even bothering to put someone on trial is also weakened by Magneto’s previous actions. As one of the Acolytes points out, Magneto killed Senyaka for going against his orders (more specifically, for not asking his permission before an attack). If Magneto was willing to kill someone for acting without orders, what do you think he’d do to someone who betrayed him? It’s bizarre that the writers wanted to continue to present a morally complicated view of Magneto after portraying him as such a hysterical killer in his previous appearance. And the thing is, if Magneto had never behaved so out of character in “Fatal Attractions”, this wouldn’t be a bad story. Colossus trying to teach a group of religious zealots about their leader’s true message of peace isn’t a bad idea; it only falls apart when that leader is just as violent and crazy as his followers are. Reviving Magneto as a heartless villain actually weakens the entire concept of the Acolytes, since the whole idea is that they’re misinterpreting what Magneto stood for (or at the very least, following an example he later regretted). Having Magneto act just as badly as they do just makes them mindless followers, and much less interesting characters.
Posted by G. Kendall at 8:47 PM

How come Collossus doesn't use the fact that the kid was turning against Cortez, who he'd discovered had tried to murder Magneto (and who he believed had succeeded), and who was manipulating all the Acolytes, as part of the defence? You'd think that'd be fairly important, possibly making the trial redundant, but it never even comes up.