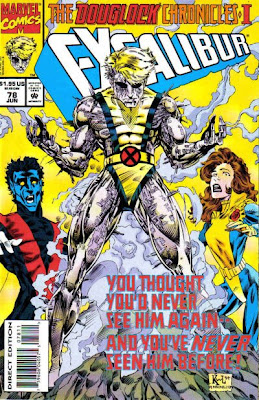 Summary
Zero meets Douglock while hiding out from Stryfe’s droids. Douglock questions why Zero is doing illogical things like building a fire when he is inorganic. Zero explains to Douglock that they must understand and define their purpose in the world. Meanwhile, Excalibur is hovering in their jet nearby. Britanic felt summoned to this area, but doesn’t understand why. Kitty calls her mother and asks about her father, but she hasn’t seen him in months, either. Below, Zero meets a young girl who is camping with her family. Douglock questions why Zero didn’t terminate her in order to cover his tracks from Stryfe’s droids. Zero explains to him that terminating life is wrong, and that he not only freed Douglock from the Phalanx for help, but also because he sensed that he was different from the others. Zero prompts a memory playback for Douglock, showing him his death as Doug Ramsey, sacrificing his life for his fellow New Mutants. Stryfe’s droids appear and attack the girl’s family. Excalibur arrives and protects the family with Zero’s help. Douglock goes against his Phalanx programming to save Kitty Pryde and the young girl. Zero uses his power to eliminate the droids, but an army of backups arrives. Zero teleports everyone away, as the replacement droids continue their pursuit. Back on Muir Island, Xavier arrives to help Moira McTaggert research the Legacy Virus.

Review
The Zero storyline continues, inexplicably in Excalibur. Zero was a recurring character in X-Force, going back to the Rob Liefeld issues. He never appeared in Excalibur before this story, and had nothing to do with any of the characters. Not only has Marvel brought Excalibur’s continuity closer to the other X-books at this point, but now the book’s acting as if it’s interchangeable with an entirely different title. I can’t imagine why a regular Excalibur reader would care anything about Zero being chased by Strfye’s droids for an entire issue (there’s no explanation of who Stryfe is, either) unless they were already an X-completist. The cast of the book isn’t given hardly anything to do, except Kitty Pryde who briefly reacts to Douglock. I can understand using Douglock as a way to pull Excalibur into the Phalanx storyline (due to Kitty’s past with Doug), but all of this stuff with Zero seems pointless. It’s pretty bad, and it’s not hard to understand why I’ve totally forgotten this storyline over the years.
Posted by G. Kendall at 8:12 PM

X: >>I can’t imagine why a regular Excalibur reader would care anything about Zero being chased by Stryfe’s droids for an entire issue...

You're absolutely right! As a regular Excalibur reader, I can tell you that I didn't know or care who Zero was, and what his deal with Stryfe was. Unsurprisingly, after essentially enduring this title rather than enjoying it since "Fatal Attractions," this was the final issue of Excal I purchased during it's initial run. I've filled in just about all the Claremont-Davis stuff I want at this point, and I keep my eyes open for the Ellis issues, but this stuff? Bleech!

I remember dropping the title at this issue, vowing never to look back, but years later I would hear people describe a legendary Ellis run at some point after, and I would wonder if I could have endured these issues to get to it. I still don't know. I've never felt personally insulted by a change in writers before.