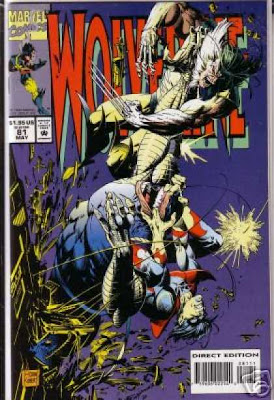 Summary
After being poisoned by one of Cyber’s claws, Wolverine is hallucinating and lashing out against Excalibur. Moira McTaggert and Kitty Pryde sedate him, while Cyber hijacks a boat and heads for Muir Island. When Wolverine breaks free of his restraints and almost slashes Kitty’s throat, the team tries to carry him to a holding cell. Cyber arrives on the island and cuts off the power, as Wolverine breaks free. He slashes at Kitty again, and soon realizes that he probably killed her. When Kitty tells him that she phased in time, Wolverine begins to regain sanity. Cyber breaks into the lab and fights Wolverine. With Zoe Culloden’s help, Cyber is trapped inside a holding cell while the team manually seals him inside. Wolverine leaves to have a talk with Kitty.

Continuity Note
The bone claws that Cyber broke off in issue #79 are already growing back in this issue.

Review
It’s not a bad action issue, but three issues of Cyber in a row are more than enough. Kubert does a nice job on the fight scenes, and the way he alters his style for Wolverine’s hallucinations is pretty cool. He also draws one of the best renditions of Nightcrawler ever. This is one of the few times Wolverine and Kitty Pryde met after the formation of Excalibur, but they’re not given much of a reunion in this issue. I’m sure anyone looking to see a touching reunion where the two characters reflect on all of the changes in their lives was disappointed to see almost an entire issue of Wolverine foaming at the mouth while a monstrous goon with metal arms chases after him. Hama does work in a few character moments, including a nice one with Zoe Culloden and Kitty (which even brings up Wolverine’s “interdependent relationships” with adolescent girls), but the focus in this issue is really on the action. The story moves fast so it doesn’t get tedious, thankfully, and Kubert’s art keeps things interesting.
Posted by G. Kendall at 8:13 PM

It sounds creepy, but I always enjoyed the relationships between Wolverine and adolescent girls...