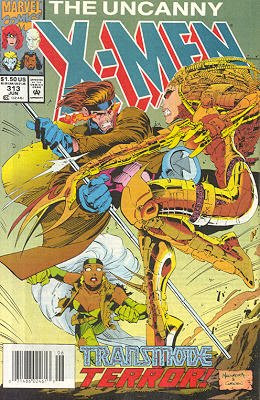 Hands Across The Water
Credits: Scott Lobdell (writer), Joe Madureira (penciler), Dan Green (inker), Chris Eliopoulos (letterer), Buccellato/Somers (colors)
Summary
Gambit rescues Yukio from the Phalanx, while Storm faces the remaining members. They explain to her that they were once human, but sacrificed their humanity in order to keep the human gene pool pure. Yukio tricks the Phalanx into thinking that she wants to be assimilated, while Gambit uses his powers to charge up a giant piece of equipment. The explosion destroys the Phalanx members. Their battle is being observed by Steven Lang and Cameron Hodge, two former human enemies of the X-Men who have joined the Phalanx. Douglas Ramsey, a former New Mutant, is overseeing the creation of new Phalanx members, but is fighting against his programming. Meanwhile at the X-Men’s mansion, Emma Frost awakes inside Iceman’s body.
Continuity Notes
This is the first full appearance of “Douglock”, an amalgam of two former New Mutants characters, Douglas Ramsey and Warlock. This is the character Marvel considered a laughably bad idea when suggested by a fan in an early X-Force letters page. I don’t know if the editors were being sarcastic because they already had plans for this character, or if they were just being jerks.
Steven Lang is re-introduced as a Phalanx member. He fought the X-Men during the early Claremont issues, and was rescued from a mental hospital by a mysterious group during the early Lobdell issues. As a kid, I was thrilled to see one of those ominous, yet brief, subplot scenes actually resolved.
Jubilee tells Banshee that after seeing what’s happened to Iceman and Wolverine, she doesn’t know if she’s ready to be an X-Man. Banshee thinks that with Professor Xavier spending more time studying the Legacy Virus, someone should be concentrating on the mutant children. All of this is done to set up the Generation X series.
I Love the ‘90s
Bob Harras is credited as “Bobbit Harras” on the title page.
“Huh?” Moment
Gambit speaks while underwater on page 3. His word balloons have an odd design, but I’m not sure what they’re supposed to indicate.
Review
It’s another action-heavy issue, which really relies on Madureira’s pencils to work. As an introduction to the Phalanx, it’s not that bad, but you can see the creators already backtracking before the story’s over. The Phalanx make a big deal about being able to counter any mutant’s power, yet they’re still defeated by a giant explosion caused by Gambit. If they’re immune to Gambit’s power, then it shouldn’t matter how large the explosion is, they should still survive it. Lobdell works some characterization into the action by emphasizing Storms’ respect for life and her reluctance to kill the Phalanx. This is actually Lobdell’s best treatment of Storm yet; introducing the idea that if the X-Men are pledged to protect all life, then the Phalanx might have to be considered living, also. It’s a nice bit of moral ambiguity that brings more than just mindless action to the story.
It’s interesting to see mostly forgotten characters like Yukio, Steven Lang, Doug Ramsey, and Cameron Hodge all in the same issue. Shortly before this story was published, the “Child’s Play” crossover also reunited the surviving New Mutants and Hellions characters, plus Margali Szardos and Amanda Sefton began showing up in Excalibur during this time. The books seem to have a weird relationship with the older material, as Claremont’s interpretations of characters like Mystique and Magneto are twisted beyond recognition, but tons of obscure characters from his era keep showing up unexpectedly (not all of them his creations, but most are). Even the Phalanx themselves are an extrapolation of ideas Claremont introduced in New Mutants. Considering that the early post-Claremont issues killed over a dozen established characters in order to build up the new villains, it’s kind of odd to see so many forgotten characters brought back and treated as more than cannon fodder. The attitude seems to have gone from “let’s kill these old losers off” to “wasn’t that old stuff cool?”.
Posted by G. Kendall at 8:33 PM

The attitude seems to have gone from “let’s kill these old losers off” to “wasn’t that old stuff cool?”

And thus you have encapsulated the dynamic of the neverending superhero monthly comic. Well done!
Right now we are experiencing the "wasn't that old stuff cool" with writers like Bendis and Johns crafting stories with their favorite C-listers from the 70's & 80's like Luke Cage and Booster Gold. I sense a wave of "let's kill these old losers off" just around the corner though....

Were they eventually separated, or is the Warlock who had his own "M-Tech" series a few years later a different character from, um, "Douglock"?

I think it was revealed further down the line (but well before the Warlock series) that there was no real Doug in Douglock. I seem to remember a horrible scene in Excalibur where Kitty phases in Doug's grave and finds his body still in the coffin.

On another note, this was an enjoyable two-parter. I love Romita, but this art is a very nice change of pace. There's an energy here that makes me not mind that this is basically just two issues of action.

Warlock made his first appearance in many years in last month's issue of Nova. It's an unusual story for fans of the character. Warlock has returned to his original appearance (in Douglock/M-Tech mode, he had a more humanoid look modeled somewhat after Doug Ramsey). He's left Earth to return to his home (at the end of the short-lived Warlock series, he was still on Earth). And some of the dialogue is unusual - Warlocks talks about his old friends the New Mutants, in a way that comes across as if the Douglock-M-Tech version of the character never happened. I'm going to continue following Nova to see where it goes (and, yes, the Technarch and the Phalanx are part of this storyline).

"And was rescued from a mental hospital by a mysterious group during the early Lobdell issues. As a kid, I was thrilled to see one of those ominous, yet brief, subplot scenes actually resolved."

I remember being thrilled by that exact resolution too! "Look", my younger self would say, "look how far back they planned these things out. How awesome are comics?!"

Of course, now I know better, but I still think it's pretty cool that someone picked up on that thread and ran with it. I often hold it up as an example of what I'd like to see more of in comics (subplots that lead into another story, instead of just self-contained six issue arcs.

Of course, the amount of time between the introduction and resolution of this particular subplot should NOT be emulated...)

The X Men fight the Borg, and at the height of their popularity, in the most obviouis and heinous rip off since Claremont co-opted the Alien into the book.

Awful action sequence too. On page 4 Storm and Yukio escape by flying away. The next we see of them Storm is zapping the Phalanx with a lightning bolt (which we're told she has trailed behind her -whatever). How did Phalanx follow them? Can it fly too? I actually had to wait for the next Phalanx story, the one with Generation X in it to find out how they were pursued.