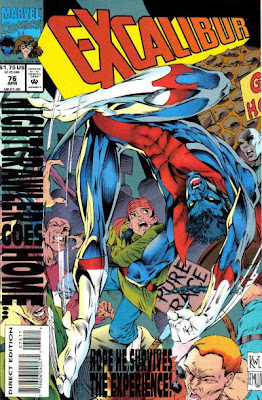 Summary
Violence has erupted throughout Germany, prompted by the demon D’Spayre. Amanda Sefton meets Nightcrawler at a hospital in Mississippi, telling him that her mother, Margali Szardos, has been kidnapped by D’Spayre. She asks Nightcrawler to rescue her, even though he’s reluctant to get involved due to Margali’s past manipulations. Meanwhile, Kitty Pryde’s father leaves her a cryptic message, while Britanic leaves alone on a mysterious mission. Amanda takes Nightcrawler to Germany, where he tries to rescue a young gypsy from a group of skinheads. He’s knocked unconscious, while D’Spayre and an imprisoned Margali watch through a scrying pool.

I Love the ‘90s
Germany was reunited “four years ago”, and the tensions from the reunification are fueling D’Spayre.

Continuity Notes
Kitty’s father is extremely off-model, based on his previous appearances.
Nightcrawler is in the hospital following the events of X-Men Unlimited #4.

Review
There’s not a lot going on in this issue, as it mostly sets up the D’Spayre story and a few subplots. It’s more generic than truly bad, which is better than I would expect from Excalibur during this transition era. It feels a little padded, especially when a shot of Kitty falling asleep as Lockheed covers her with a blanket is given an entire splash page. Continuing Marvel’s efforts to bring the book closer to the other X-titles, Nightcrawler spends a lot of time reacting to the events of X-Men Unlimited #4. That issue did have a large impact on his continuity, so it’s understandable that it’s being brought up here, but Ashford doesn’t really get anything interesting out of it. Lashley’s pencils are mostly weak, mainly due to his inability to draw human faces properly. All of his female characters also have the same generic look, which gets old quickly.
Posted by G. Kendall at 8:18 PM