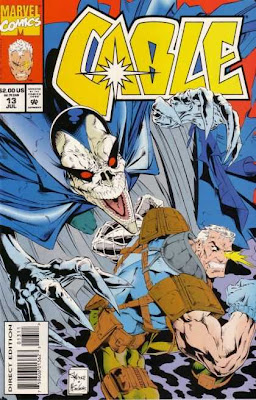 Summary
Cable and Lee Forrester escape a hurricane in the Florida Everglades. While running to safety, Cable falls into quicksand. Lee can’t save him, but Cable manages to use his telekinetic powers to lift himself out of the quicksand. That night, they discover a cabin in the swamp. An old man named Desmond offers to take them in, but they’re unnerved by his cryptic comments. A mystery man named Lucas appears at the door, saying that he doesn’t want Desmond to start the game without him. That night, Cable has violent flashbacks to the day his wife died, and Lee sees a vision of her father’s suicide. Cable sees images of every woman who has left him, while Lee has another vision of Magneto murdering Cyclops. When Cable hallucinates himself wearing Stryfe’s armor, he demands to know who the old man is. He reveals himself to be D’Spayre. D’Spayre tries to feed off of Cable and Lee’s grief, but the two kiss one another and anchor themselves in reality. Lucas reappears, telling D’Spayre that his time is up. He takes off his skin and reveals himself as Belasco.
Production Note
For some reason, this issue has a new logo. It’s a pretty bizarre design and only lasts for one issue.
Continuity Notes
Cable is barely able to use his telekinetic powers to lift himself out of the quicksand at this point. He collapses from the effort and needs time to recover.
Creative Differences
A couple of word balloons have obviously been re-lettered (Starkings is using computer fonts at this point, but the corrected balloons are obviously done by hand). One balloon has Lee explicitly saying that her father committed suicide, another has Cable comment that he’s been turned into Stryfe, and both D’Spayre and Belasco have altered balloons referencing D’Spayre’s recent Excalibur appearance.

Review
There’s not a lot to say about this issue, except that Steve Skroce makes his debut as artist. Skroce will stay with Marvel for the next few years, usually working on the X-books. Ever since he worked on the first Matrix movie, his comics work has been extremely sporadic. His work here isn’t very impressive, but I admit that it’s nice see an artist not doing a bad impression of Jim Lee, Rob Liefeld, or Todd McFarlane. Skroce’s work almost reminds me of Bart Sears’ earlier art, with a lot of wavy lines and characters that look like they’re about to melt. Some of the pages aren’t bad, but a lot of the work is just ugly. He’ll get better as the years go on, doing decent work on Gambit and Wolverine. I thought he also did an admirable job with Alan Moore’s scripts during their very brief Youngblood run.

Glenn Herdling again finishes another writer’s story (if Lobdell contributed to this one, he’s not credited), by basically turning this issue into a sequel to one of Lee Forrester’s first appearances. That means bringing back D’Spayre just a month or so after he returned from obscurity in Excalibur. Since all of the references to the Excalibur storyline are in re-lettered word balloons, I’m inclined to believe that Herdling had no idea anyone else would be using him when he wrote this script. Pitting tough guy Cable against an enemy he can’t physically beat isn’t a bad idea, and using Lee Forrester as the impetus to bring D’Spayre back works pretty well. It’s an average story, but it moves at a decent pace and doesn’t feel as aimless as many of the previous issues of this series. Herdling portrays Cable as being more lighthearted than usual, making him feel more like a traditional Marvel hero and less like a hard-edged soldier. It makes the issue read kind of odd in a few places, but I’ll give him credit for trying to give Cable a little more personality.
Posted by G. Kendall at 8:18 PM

Is the logo just meant to echo the distorted, hallucinatory tone of the story? That would explain why it's only on this one issue... aside from its obvious ugliness.

I considered that, although that still seems like an odd reason to change the logo for just one issue.