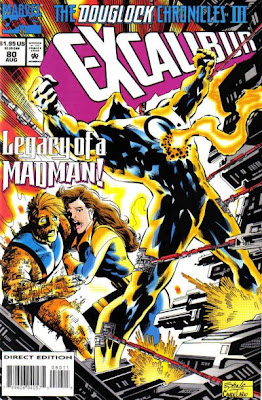 Summary
Britanic questions Zero about the cure for the Legacy Virus as Stryfe’s underground base self-destructs. Zero tells him that the knowledge is inside of him but he’s unable to interpret it. The other members of Excalibur protect the human family from the explosions as Zero and Kitty search Stryfe’s computers for a way to stop the self-destruct sequence, or for any way to unlock the Legacy Virus info. Zero decides that the information inside of him is inaccessible and tells Excalibur to rescue the family while he stays behind to manually direct the blast sequences. After getting the family to safety, Douglock goes back to save Zero. Kitty points out to him that acting selflessly goes against his programming for self-preservation. While connected to the base’s computer system, Zero receives a recorded message from Stryfe. He tells him he’ll remove the last of his programming blocks so that he can have full access to the data that could lead to a Legacy Virus cure, but only in the final seconds he has to live. Douglock arrives, and Zero transfers the information to him. Zero is apparently destroyed in a final explosion as Douglock escapes. Back on the surface, Excalibur discovers that they’re inside the Pentagon. Meanwhile, Amanda Sefton tells Rory Campbell that she also saw the image of him as Ahab while in the timestream, and Moira McTaggert tells Professor Xavier that she is the human with the Legacy Virus.

Review
The Zero storyline is finally, finally over. Not only was Zero wrongly shoehorned into this title in the first place, but the actual storyline is extremely tedious and doesn’t add up to much of anything. If the purpose was to have Douglock join the team, shouldn’t the previous three issues have focused on him and not Zero? Douglock having the key to cure the Legacy Virus doesn’t go anywhere, and I honestly don’t remember if it was brought up again. Giving Moira the Legacy Virus is another storyline that’s suddenly introduced and then goes nowhere. I assume she was given the virus to set the stage for more humans contracting the disease, but I’m almost positive that no other humans were diagnosed. Having humans catch a fatal disease from mutants would have greatly escalated the human/mutant conflict, so maybe that’s why Marvel decided to hold off on the idea. An unrecognizable Amanda Conner shows up as the fill-in artist, turning in a fairly awful job. Having three guest inkers probably doesn’t help things, either. Everything about Excalibur at this point feels rushed, half-hearted, and pointless. I knew this stuff was bad as a kid, but I had already decided that I needed Excalibur to be a true X-completist.
Posted by G. Kendall at 8:29 PM

The plot-lines of Moira contracting the Legacy Virus and Douglock having access to the cure were revived when Ben Raab became the writer of the book (following Warren Ellis), several years later. Raab didn't resolve those stories, either, but the book was canceled on him, rather abruptly (with #125).

I never read Raab's run, but it's nice to know that he at least tried to do something with this.

Raab's run was pretty worthless, in my opinion, though I suppose writing Excalibur at that point was sort of a thankless task. For years I counted Raab among the worst mainstream comics writers, though I hear good things about his Phantom stories over at Moonstone these days.