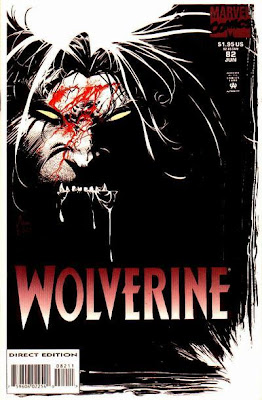 Omnia Mutantur (Everything Changes)
Credits: Larry Hama (writer), Adam Kubert w/Bob McLeod (pencilers), Mark Farmer & Joe Kubert (inkers), Pat Brosseau (letters), Steve Buccellato (colors)
Summary
Wolverine returns to Japan to honor the memory of Mariko, his dead fiancé. Yukio visits him in the temple where they planned to marry, warning him that he has enemies in Japan. The Hand suddenly attack, but Yukio is able to convince them that this can’t be the real Wolverine because he doesn’t have metal claws, plus his wounds aren’t healing. After visiting with Yukio, he goes to check on his adopted daughter, Amiko. He discovers that her foster parents are squandering the money set aside for her, forcing Amiko to stay in a small, barren room, and verbally abusing her. He returns in costume, posing as a Hand ninja. He claims that Amiko is under their protection, but the parents recognize him as the gaijin that visited earlier. He intimidates them with his sword work and leaves with Amiko. Later, he asks Yukio if she will look after her. He makes a deal to exchange the Clan Yashida Honor Sword to the Silver Samurai for his assistance in getting the government to transfer custody of Amiko. Yukio promises to look after Amiko as if she were her own. Meanwhile, Bloodscream discovers the androids Elsie Dee and Albert in the wilds of Canada. They’ve just returned from a mysterious time travel adventure.

Continuity Notes
Wolverine promised to take care of Amiko after her mother was killed in a dragon attack in Uncanny X-Men #181. According to this issue, Landau, Luckman, and Lake has been sending money to provide for her.

Moira McTaggert says that Wolverine’s immune system is deteriorating and that he’s going through a “physical regression to some ancient gene-memory”. This seems to be more foreshadowing for the “feral Wolverine” storyline. Zoe Culloden says that she has a lead that could help him, and that as an employee of Landau, Luckman, and Lake, it’s her job to see to Wolverine’s future.

Review
First of all, I have to say that this issue’s cover is one of my favorite Wolverine images ever. Its only connection to the story is the fact that Wolverine’s forehead is slashed in this issue, but that’s easily forgivable. Marvel made a t-shirt (and I think a poster) out of this image, but basically ruined it by coloring it in. Did anyone really look at this cover and think, “that would look great…if only it was in color!”? Someone at Marvel editorial must have thought enough of the art to totally change the cover layout to accommodate it, which almost never happened back then.

Another obscure element from the ‘80s material returns in this issue with Wolverine’s ward, Amiko. I have no idea why Claremont gave Wolverine an adopted daughter during his run, but he certainly didn’t go anywhere with the idea (I suspect it might have been done to give Wolverine another reason to visit Japan regularly, but it never worked out that way). Hama portrays her as an average little girl with stereotypically awful foster parents. It’s certainly a cliché, but Hama gets enough humor out of the parents to make it work. He also has a few cute moments with Amiko, like when she says that she remembers Wolverine because of his costume and hairy arms, but he thankfully doesn’t go overboard. The excessive cuteness is reserved for Elsie Dee’s cameo in this issue. A sentient little girl android who tawks wike dis gets old fast, but I can tolerate her in small doses.

The ending of this issue is a little strange, as Wolverine hands over his adopted daughter to Yukio. Yukio wasn’t a well established character, so a writer could conceivably reveal that she has some hidden maternal instincts, but her previous appearances really don’t lead you to believe that she would be much of a mother. This is briefly acknowledged, but dismissed quickly. The two do have a nice conversation earlier in this story that does establish her feelings for Wolverine, but it still seems sudden for him to offer her his ward. Basically, Wolverine just asks her to do it, and she agrees. If Yukio’s going to give up her life of adventure, there’s no indication. If the idea is that Wolverine wants Amiko to be raised in a chaotic atmosphere, that’s not presented clearly either (and, really, why would he?). I think we’re supposed to take Yukio at her word, and assume that her loyalty to Wolverine will be enough to keep her out of a dangerous lifestyle. This wouldn’t be a bad arc for the character (resisting her urge for trouble while trying to raise a child), but it didn’t lead to a lot of future material.

Adam Kubert does a fine job on the art, with his legendary father showing up for the final six pages as inker. It looks good, but it doesn’t exactly blend in with what Mark Farmer was doing for the majority of the issue. This is also one of the first issues to be digitally colored, which unfortunately gives some of the pages a blurry, off-register look. Overall, it’s still a strong looking issue, though.
Posted by G. Kendall at 8:09 PM

I'm glad you mentioned the cover, as it's easily my favorite cover of the whole run. Did they really color it in for the t-shirt? What a waste.