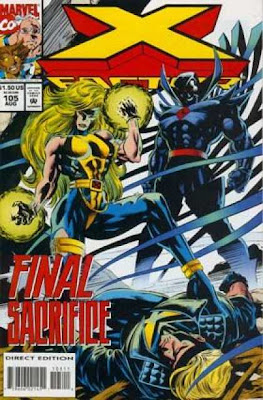 Summary
The Nasty Boys fight Malice, as Mr. Sinister grabs the unconscious Polaris. Guido and Wolfsbane arrive and try to stop the Nasty Boys, refusing to believe Sinister when he tells them that Malice is possessing Havok’s body. Polaris recovers and stops their fight with the Nasty Boys. Malice releases Havok’s power, seriously injuring Guido, Wolfsbane, and the Nasty Boys. Polaris fights back, and Sinister orders a weakened Malice to leave Havok’s body and take over Polaris’. Polaris reluctantly agrees, realizing that this is the only way to free Havok. Malice threatens to take over Polaris’ body forever as punishment for interfering. As she leaves Havok’s body, he realizes what’s going on and fights to keep her out of Polaris. The conflict tears Malice apart, as her spirit form dissolves, leaving behind only her choker. Sinister tells Havok that he saved their lives for his own reasons, as he teleports away with the Nasty Boys. Meanwhile, a man who resembles Jaime Madrox enters X-Factor’s headquarters. He goes through their home and is shocked to discover a photo of Madrox with the team.

Continuity Note
Sinister tells Malice that he’s well aware of what Threnody is doing behind his back, which is a reference to the recent story X-Men #34.

Review
The Malice storyline finally ends, after dragging for at least an issue too long. The resolution is clever, but it all seems anticlimactic after such a long buildup. Bryan Hitch pencils the first of several fill-in jobs he’ll do for the X-books during the ‘90s. I don’t know if he was considered too slow for a monthly or if Marvel was just content with their regular artists, but his work here is strong. For some reason, I didn’t care for Hitch’s fill-ins when I first saw them as a kid, but they hold up a lot better than most of the art from this era.

What’s really notable about this issue is the return of Jaime Madrox…just five issues after his death. He returns so quickly, the letters column is only now printing letters about his death issue! I really have no idea what Marvel was thinking with Madrox’s death. It’s something they wanted to do since the Peter David issues, and they went through with it less than a year after he left as writer. Since Madrox would have the least convincing death of any member, I don’t know if Marvel chose him due to the ease of brining him back, or if they really thought that the audience would buy it. Bringing him back just five issues later leads me to believe that his return was planned all along -- and yet this scene is totally ignored for years. In fact, a later letter column will just tell readers to forget about this scene (which is still one of the strangest things I’ve ever read on a letters page). So it seems as if Marvel had second thoughts about bringing him back immediately after this issue came out (just as bringing him back in this issue also implies that they quickly had second thoughts about his death in the first place). Madrox did eventually come back, and I vaguely recall some lip service paid to this issue, but it was clear that the actual story of his return wasn’t planned at this stage. Despite their flaws, the storylines in the X-books at this time do tend to have a forward momentum, but this erratic backtracking with Madrox is a sign of some of the chaotic storytelling that affects the titles as the ‘90s go on.

Even as an un-jaded comic reader in 1994, I rolled my eyes upon seeing Jamie's return, and was immediately uninterested in that plotline (which,as you note, they basically proceeded to completely drop for 30 issues). But it is a treat to see Bryan Hitch on this issue.

Much like you, I was hardly impressed with Brian Hitch as a teenager. However, seeing his unbelivable work on The Authority I hardly know how I could have been so foolish.

Also, considering Carlos Pacheco was the "main artist" for Excalibur in 96 and did maybe 5 issues of it, I don't see how Hitch could be too slow.