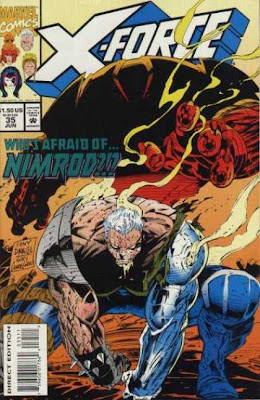 Beg Tomorrow
Credits: Fabian Nicieza (writer), Tony Daniel (penciler), Holdredge, Candelario, Conrad, Green, Champagne, Rubinstein (inkers), Chris Eliopoulos (letterer), Marshall, Lopez, Thomas (colors)
Summary
Domino and Shatterstar investigate Strong Industries after learning that it has landed a Pentagon contract to develop “self-actualizing computers”. One of their scientists shows them a computer chip that is a major advance in the creation of sentient robots. In Tennessee, Rictor and Warpath secretly take photos of a scientist’s work. Cable meets with Forge in Washington and shows him the computer chip developed by Strong Industries. Forge agrees with Cable that this advancement in artificial intelligence should have been years away. In Massachusetts, Siryn meets with her father, Banshee, and asks him about Nimrod, a Sentinel from the future who has faced the X-Men in the past. Soon, Cable explains to X-Force that squadrons of Sentinels murdered thousands of mutants in his time. They plan on destroying this new technology before a Nimrod can be created in this timeline. After infiltrating Camp Hayden in Kentucky, X-Force is shocked to discover a new Nimrod model has already been developed.

Continuity Notes
Shatterstar tells Domino that he “lived among the shadows” for two years after escaping the “arena masters” in his dimension.

The computer files Siryn and Warpath stole from the X-Men in issue #19 apparently didn’t have any data on Nimrod, for some reason. She asks Banshee for information about Nimrod, but he actually wasn’t on the team when they faced him (although I guess it wouldn’t be too hard for him to find out the info she needs).

I Love the ‘90s
Domino tells Shatterstar that he’s been watching too much Yo! MTV Raps after he uses the phrase “24/7”.

Review
This is a good example of what X-Force was intended to be, a group of proactive mutants aggressively going after threats to mutantkind. There was some lip service paid to this direction in the early issues of this series, but this quickly devolved into poorly executed issue-long fight scenes (the longest one involving the team reacting to an attack, not going after any threats at all). The action here is reserved for the final scene, as the majority of the story is spent on having the team investigate the development of new Sentinels. While the team members follow their leads, Nicieza uses the opportunity to develop characterization and advance a few character arcs. Cop shows do this all of the time, and Nicieza is able to make it work here. I wish the series had tried more stories like this.

Bringing back Nimrod is another example of the “Totally ‘80s” attitude that seemed to be sweeping the books at this time. Nimrod was built up as a major threat during Claremont’s first UXM run, but was forgotten over the years. Showing how present day technology lead to his creation isn’t a bad idea, and Cable’s own past as a time traveler is a nice way to connect the villain to this series.

Tony Daniel is given six inkers in this issue, which averages out to less than four pages per inker. I actually don’t mind Daniel’s cartoony style at this point, and I like the energy he brings to a lot of the pages. Unfortunately, many of the pages also come across as rushed and sloppy. Having six inkers in one job also doesn’t help, although this issue does look fairly consistent until the final few pages. This issue also has three credited colorists (who can’t seem to keep a lot of the characters’ hair colors or ethnicities straight) and a few lettering mistakes, so I’m assuming that this one was rushed out of the offices pretty quickly.
Posted by G. Kendall at 8:10 PM

I loved this issue! I agree that this sort of proactive tone old have suited the book. Watching the slow build up of the team gathering information and preparing to strike is great.