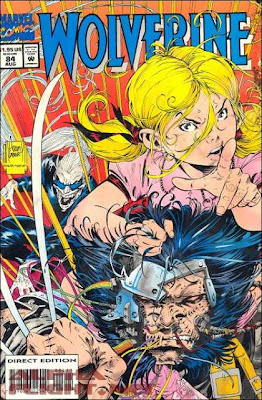 Summary
More and more Hunters in Darkness invade the arctic research station. Dr. Smith dies of her wounds, as Wolverine and James and Heather Hudson plan their next move. Harry Tabeshaw is convinced that the Hunter he captured was the last living one, wondering if these others might have been displaced in time. Biologist Dr. DeLong speculates that the Hunters are following the oldest, wisest Hunter and are developing a strategy. Wolverine decides to go outside and find the loading suit that Sverdrup was wearing when he was killed. The others pop flares and thermite to cover him from the nearly blind Hunters as he runs outside. Meanwhile in another section of Canada, the android Albert runs a search for Wolverine and discovers the Hunter in Darkness’ pheromone signature. He questions how the Hunter could still be alive, since Albert and Elsie Dee last saw him in the eighteenth century. Elsie Dee tells Bloodscream the story of how they traveled through time. They discovered a skeleton with adamantium claws in a Siksika burial ground, which tested out to be over two hundred years old. Spiral agreed to send the pair back in time to save Wolverine, but they were unable to find him in the eighteenth century. They befriended the Hunter in Darkness there, who apparently has a special bond with Wolverine. Back in the present, Wolverine puts on the loading suit and fights the Hunters. The oldest Hunter and Wolverine recognize one another, although Wolverine doesn’t understand why he looks so old now. The Hunter stares into his eyes and then leaves, and the others soon follow. Later, Harry Tabeshaw takes Wolverine to visit Silver Fox’s grave.

Continuity Notes
Wolverine first met the Hunter in Darkness in a flashback in Wolverine #34. He saved the Hunter from a bear trap in the woods, during the period when Wolverine was running wild in the wilderness before the Hudsons discovered him.

Review
There are a few moments I like in this issue, but overall it’s fairly weak. The extremely inconsistent art is a major problem, with four inkers doing a rush job over Ron Wagner’s breakdowns, and two more artists brought in to finish the subplot pages. For the most part, it’s just a mess. I do like the fact that Hama tries to ground the Hunters in reality by giving them hunting patterns and biological traits, and Wolverine’s final confrontation with the oldest Hunter isn’t bad. The final scene at Silver Fox’s grave is also nicely done, allowing Wolverine to be sensitive but remain in character. The Elsie Dee subplot is definitely dragging, though. Aside from following up a previous storyline with Spiral and Mojo that didn’t make a lot of sense in the first place (Wolverine #51-#53), it also relies on events that happened “behind the scenes” of previous issues, making things even more convoluted. I know that there’s at least one more issue dedicated to this storyline, but I don’t remember Hama ever getting around to finishing Elsie Dee and Albert’s story arc before leaving the book.
Posted by G. Kendall at 8:12 PM