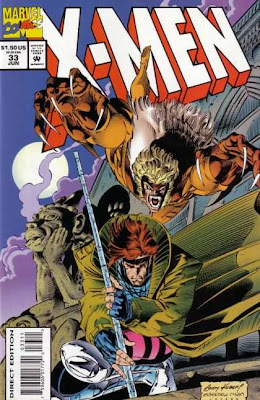 Summary
Sabretooth tells Rogue the story of his first meeting with Gambit. In Paris, a seventeen-year-old Gambit saves a young woman named Genevieve from Sabretooth. Sabretooth was hired to take back the pendant she stole from the wealthy businessman, Herzog. Gambit’s brother, Henri, explains to him that he has to steal the pendant for the Thieves Guild as an initiation. Rather than directly stealing the pendant from Genevieve, Gambit wants her to fall in love with him first. The two spend time together throughout the city as Sabretooth watches. Eventually, after sleeping together, Gambit steals the pendant from Genevieve during the night. A few hours later, Sabretooth kidnaps her. Gambit follows the note Sabretooth left at his apartment to Notre Dame. Sabretooth is holding Henri and Genevieve hostage on a balcony. He tells Gambit to throw the pendant to him and he’ll get to choose which one to catch. After Gambit throws the pendant at Sabretooth’s feet, he drops both of them. Gambit saves his brother, but can’t save Genevieve. As she dies, she tells him that she would have given him the pendant if he asked. Back in the present, Rogue tells Gambit that she doesn’t know what kind of person he is, and he tells her that he needs her to find out. Beast visits Sabretooth’s cell, telling him that he’ll need his help to infiltrate Mr. Sinister’s lab.

Continuity Notes
After hearing Gambit’s accent, Sabretooth assumes that he’s a member of the Thieves Guild, telling him that he hasn’t run into a member of his “clan” in years.

Gambit says that his arranged marriage to Bella Donna is four months away on his birthday, meaning that he was eighteen in the flashback in X-Men #8.

Miscellaneous Note
This story is only nineteen pages for some reason, instead of the regular twenty-two.

Review
This is one of Nicieza’s strongest issues of X-Men. It mainly serves as a one-shot story about Gambit, but it also ties into the ongoing subplot about his relationship with Rogue, while giving Sabretooth something nasty to do at the mansion. There’s not a lot of action, but Kubert’s art still brings a lot of energy to each page. Having Sabretooth do more than just physically intimidate the team is a smart move, and Nicieza’s able to sell him as an effective manipulator. The story Sabretooth tells is overwhelmingly bleak, where most of the characters are adulterers and thieves, and his own cynicism about love is justified. Herzog is truly in love with Genevieve, but he’s still cheating on his wife. Genevieve is playing Herzog for his jewelry, but ends up falling for Gambit. Gambit manipulates Genevieve (while cheating on Bella Donna, his fiancée), and the game he plays ends up getting her killed. It’s one of the darkest comics I read as a kid, and I can remember being surprised at the grim ending.

For the first time, Gambit’s past as a thief is presented in a negative light, as the flashback shows how heartless the character can be. Setting the story in Gambit’s teenage years is a good idea, as it creates enough distance from his current self to make it conceivable that he’s changed. It creates an interesting dilemma for Rogue -- does she judge Gambit by his past, or what she knows today? Is she in any position to condemn him given her own past as a criminal? (An idea that isn’t brought up in this issue, but should have been.) Do you judge any adult by what they did at seventeen? I’ve never cared for the Rogue/Gambit relationship, but this issue shows that it could have lead somewhere interesting. By this point, a lot of the elements that ended up damaging Gambit as a character have emerged (the thick accent, most of the Guilds material), so it’s nice that Nicieza’s able to do at least one story that shows Gambit’s potential.
Posted by G. Kendall at 8:33 PM

This remains one of my absolute favourite issues of the core X-titles. It's definitely one of the strongest single-issue stories as well. It makes great use of both Sabretooth and Gambit. The world created in the flashback scenes is vivid and dark and the moral choices presented in the past and present are great. Kubert produces some of his best work on the title and the whole package is excellent.

I agree completely with Rob. Nice standalone story that fleshes out several characters and very 'adult' writing. One of the best of the 90s X-issues

I can't really say anything that hasn't been said. I greatly enjoyed this story, and still remember it fondly.

This was the kind of story about Gambit's past as a thief I'd have liked to see more of, instead of all the time travel/Candra the External stuff with which we ended up.

Maybe illustrating Gambit and Rogue stories brings out the best in Kubert; I seem to recall one of the early post-Age of Apocalypse issues he did that focused on them meeting up after Rogue fled the team (having kissed Gambit before AoA).

It had a pretty weak story (promising revelations but not really providing them) but fantastic Kubert art. I may be misremembering that, of course.

I think the issue you're referring to is 45, with the quadruple gatefold cover. It is beautifully illustrated by Kubert. There was a lot promised, but seemingly nothing revealed about Gambit's past. Sinister pops up for a cryptic cameo at the end to foreshadow his involvement. But we'll get to that one later (I hope to God this column goes at least that long ... please!).

I actually plan on going until either Onslaught, or the end of Lobdell's run. :)

No Kelly/Seagle or Davis runs? I actually thought those were pretty good, but I wouldn't want to pressure someone into reading every X-Book from the 90's! I just like the blog, would love to see it go on.

Please go until the end of Lobdell's run! Uncanny#350 (although Seagle's first) really feels like the benchmark of the era. I recently reread a chunk of 1995-97ish and it was a good stopping point. The hints of Gambit's past with Sinister really ramp up more than I remembered once I read this set altogether for the first time in awhile (getting really annoying, not to mention obvious.. ok I'll save these comments for when we get there), and #350 issue to end on for closure on that at least.

This is where I started enjoying the Nicieza run on X-men. Prior to this, it was just over-the-top melodramtic angst, and the horrible Revanche storyline. There were a few good issues here and there, but for me, they were exceptions. Now, he seems to have found his niche, and produces some good stuff. Not every issue is a winner, but for me, the title imporves ALOT starting with this issue. It's a shame the next 13 issues or so are hampered by too many crossovers.