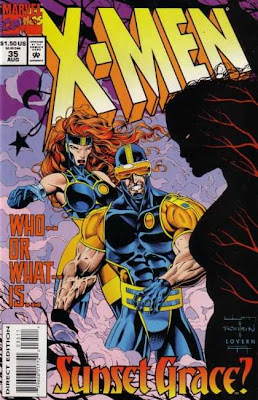 Summary
Cyclops and Phoenix awake inside the SHIELD helicarrier. Their minds have just returned to their bodies in St. Barts after being sent into the future. Nick Fury briefs them on a local mutant named Sunset Grace who has opened a rift to another dimension. He sends them on a mission to rescue the SHIELD technicians who are trapped inside the strange world. Cyclops and Phoenix enter the rift and discover that it resembles a child’s fantasy land. Phoenix sees that the technicians are okay and sends them back through the rift with Cyclops’ help. They explore the strange dimension and meet Sunset Grace. She tells them that she first entered this dimension when she was fifteen, but eventually lost interest in it as she grew older. Years later, her family was in a car accident. Grace used her powers to send her husband and son to the other dimension as their car fell from a cliff. However, Grace wasn’t able to follow them because the entrance only opened out of her own desperation. After so many years away, she couldn’t find a way to enter it again. She became catatonic, and a young Professor Xavier was sent to treat her, healing her mind and closing off access to her powers. Her powers didn’t reemerge until Cyclops and Phoenix, not far from her on the beach, were sent into the future by Rachel Summers. The psychic cry Phoenix released apparently awakened her powers. Phoenix uses her powers to reunite Grace with her husband and son inside the dimension, and then leaves with Cyclops. She tells Cyclops that Grace’s husband and child actually died in the car accident, and that she was only being reunited with the memories that she’s kept locked inside for years. Cyclops wonders if it’s right to allow her to stay inside her dream world, but Phoenix replies that her happiness is worth it.

Continuity Notes
This is return of Cyclops and Phoenix to our timeline after their miniseries. The amount of time they say they were (mentally) gone alternates between ten years and twelve years. Nick Fury says that the systems inside the X-Men’s mansion seem to have been disconnected, which is a reference to the upcoming Phalanx storyline.

Production Note
This is the second issue in a row that’s only twenty pages.

Review
It’s more time killing before the Phalanx crossover begins. This story has no bearing on any of the ongoing storylines, although Nicieza does try to connect the loss of Sunset Grace’s family with Cyclops’ reunion with Nathan. It’s kind of a stretch and doesn’t really work. The twist ending isn’t that bad, but it’s not enough to save a mediocre issue. Liam Sharpe’s fill-in art is inconsistent, but I like a few of the pages and he creates some interesting designs for the fantasy dimension. More entertaining than anything in the actual story is a letter in the letters column from a girl in the Philippines who considers herself Gambit’s wife. Her friend Mona is Mrs. Gambit #1 and she’s Mrs. Gambit #2, so not only is she fantasizing about a fictional comic book character, she’s content to be the second wife in their imaginary polygamist marriage. Don’t you miss letter pages?
Posted by G. Kendall at 8:34 PM

See, for example, a bit I quoted here, on my own blog.

I remember being really impressed by this issue at the time. Sharpe's art was eye-popping--I still remember his unusual layouts here--and I thought the Sunset Grace story was rather touching. Of course, I was a teenager at the time; I should take a look now and see if G.'s analysis is accurate.

I have to agree that, as a kid, this one stood out as special to me, probably because it was so different and because Sharpe's layouts were quite unique for the titles at this time. Upon recently rereading it, it's pleasant but dull. I wish Scott and Jean were doing something more x-related upon their return than this filler story.

The most exciting part of the issue for me when I was young was Sharpe's drawing of Banshee/Jubilee/Emma/Sabretooth, hyping up the Phalanx crossover and taking up half of one of the issue's 20 pages. I guess I was excited for the story, which didn't exactly live up to my expectations.

What is up with Cyclops's arms on the cover? I would say something witty about them, but they disturb me to much.